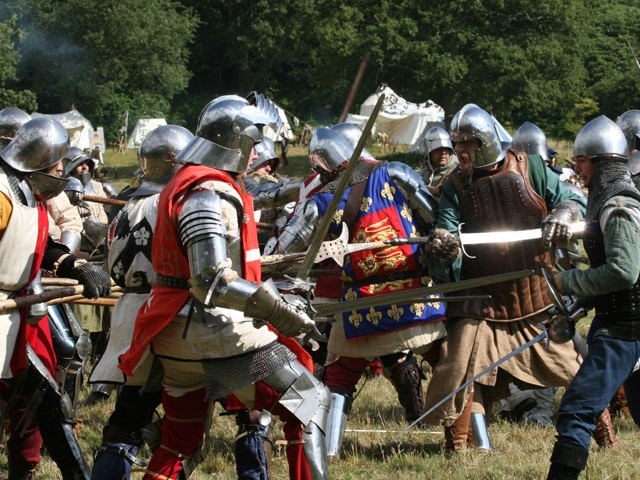 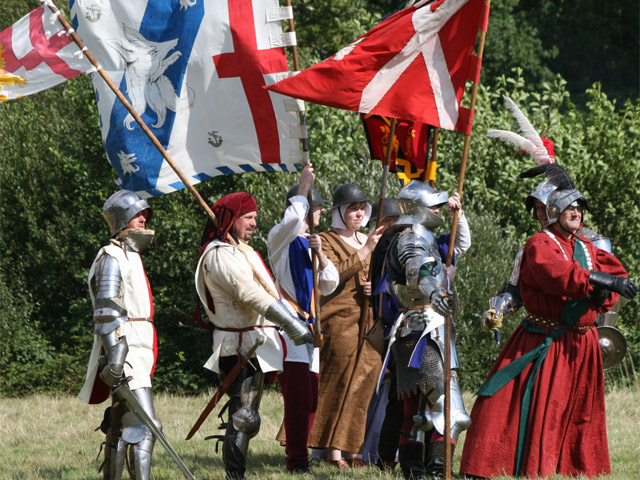 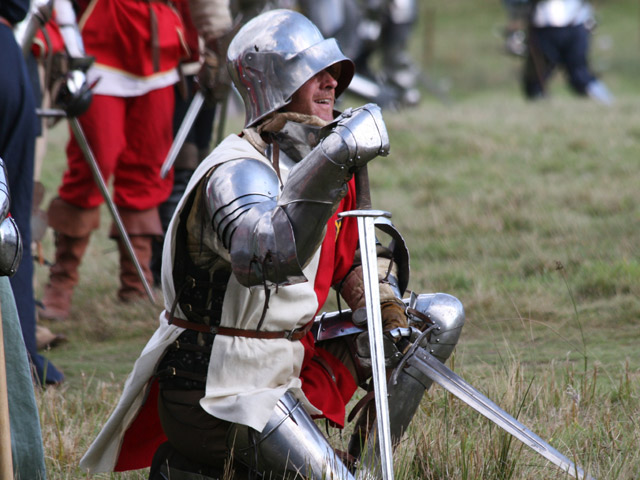 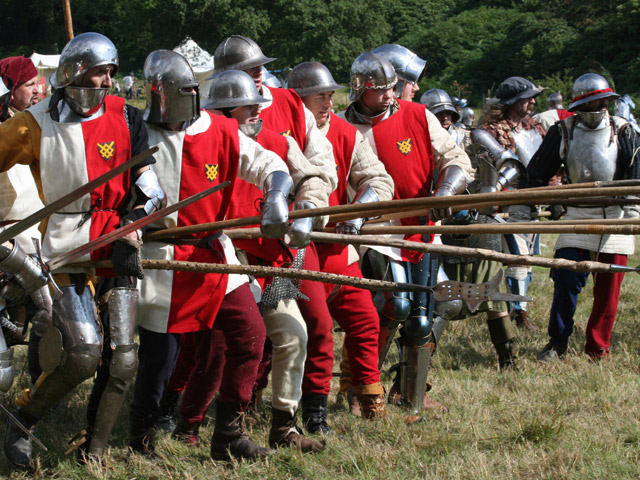 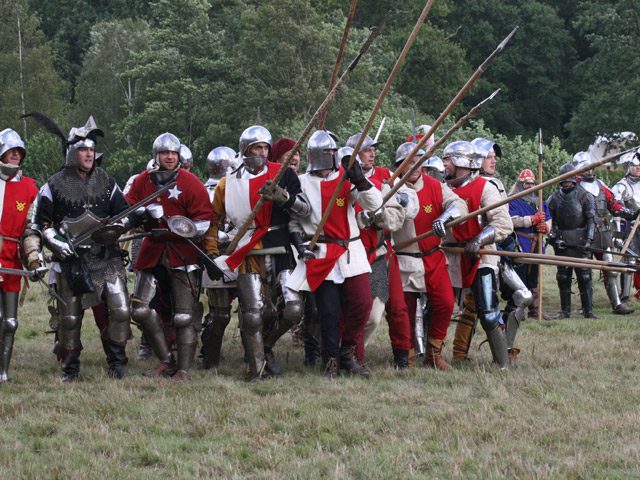 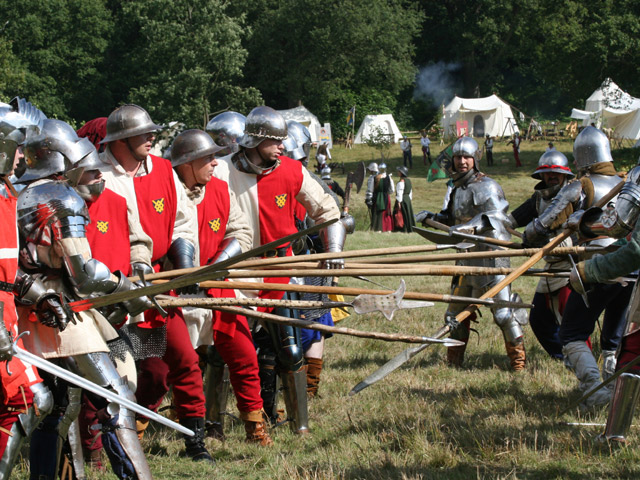 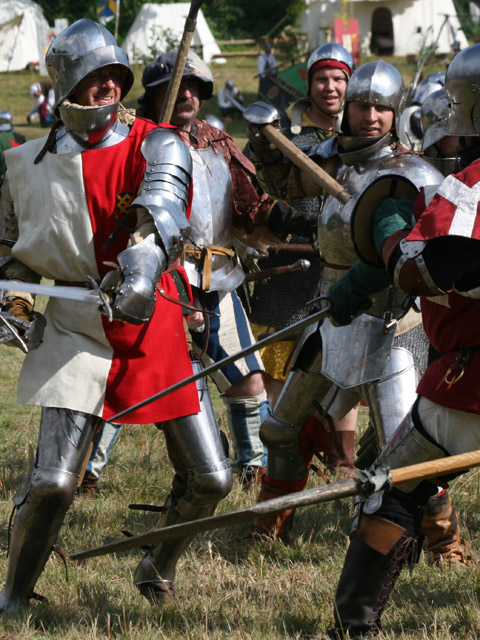 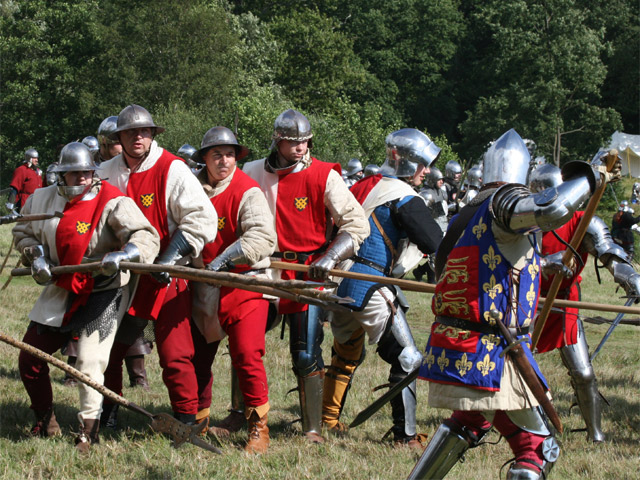 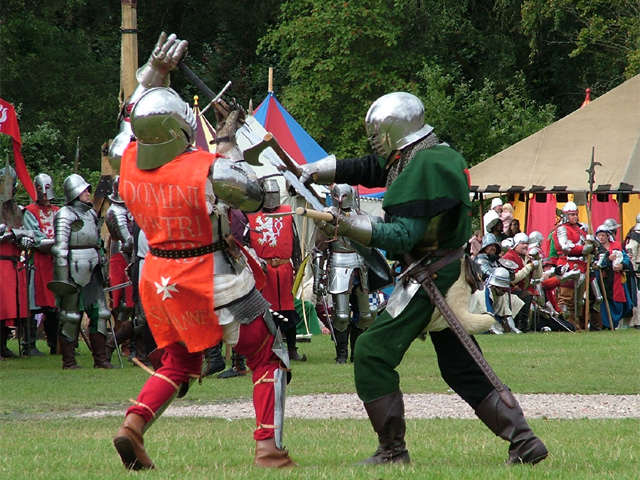 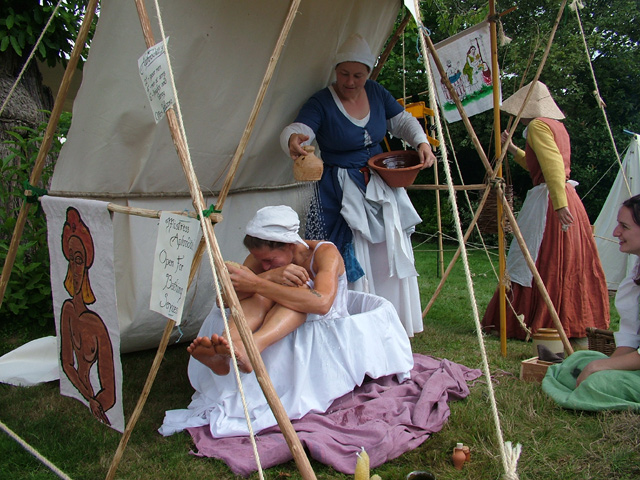 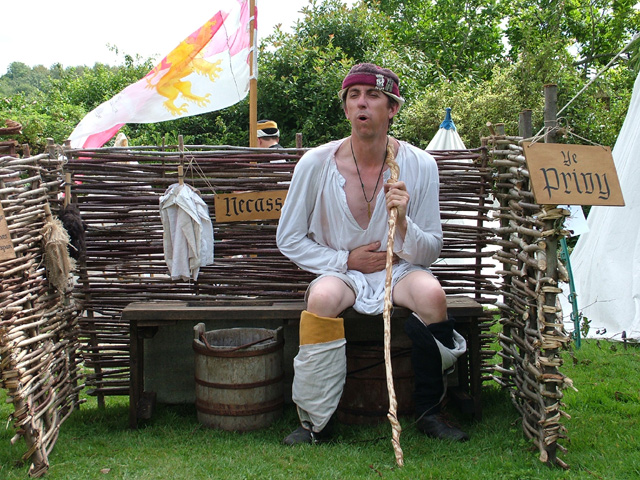 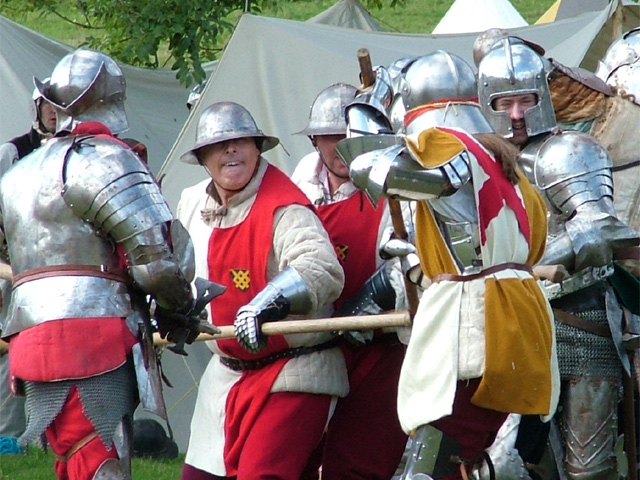 Having won the Living History Competition at the Herstmonceux Medieval Festival the previous year, the pressure was on the group to raise our standards again for 2006. So rising to the challenge saw the introduction of Aphrodite Leggits Bath Tent, a hospital of The Knights of St.Johns at Poling, a privy (with some very authentic smells...a recipe handed down by Sussex Tinkers no less), and a hurdle maker. Although the Saturday saw a steady stream of visitors, the Sunday saw a positive invasion and swamping of the encampment. With arrow extractions, armour cleaning, and some frequent users of the privy (none of whom paid for using the authentic "bottom wipes"!!!) the "siege camp" really came to life. It was a tremendous team effort, and despite some pretty adverse conditions, we were declared the 2006 living History Competition Winners! Unfortunately, the majority of the group were forced to leave the festival site over the Sunday night and early Monday morning (scroll down to see the e-mail sent to Gilly Geisler, the festival organiser), and, as a consequence, I took the decision to return the �500 prize money. The encampment, despite the terrain, weather, and lack of space, proved a great success, and everyone put a tremendous amount of time and effort to making it look so good. Once again, the knights and men-at-arms of the Household took part in the sieges and battles around the castle. Although we had 3 new members, and several suffering from bad backs, heat, and general exhaustion, the line, again, never broke (see the photos on the web site)...although several Czechs managed to outflank us, and chased me (the Household banner bearer) half way round the battle-field, what little dignity I had left was saved by Lord Hartley. My thanks to him for coming to my assistance. What really impressed me again was the team spirit, and "sticking together policy" that prevailed throughout the weekend. When we were finally scripted to die on the Sunday afternoon, everyone was within touching distance of the banner, and what a heroic last stand it was! My thanks to the Czechs and the Irish groups for giving us such a good scrap, and to members of the Free Company who stood with us on the Sunday...their support was greatly appreciated.

A big thank you to all who took part, and to those who supplied support and assistance for the displays we had...I think we all recognised it was a strange weekend for all of us, in so many ways, but to have done what we did, with all the factors against us, was really impressive.

I would be grateful if you could forward this e-mail to all the groups who had participated in the Medieval Festival at Herstmonceux Castle over the August Bank Holiday weekend 2006...

Having entered the Living History Competition for the second year at the Medieval Festival we were delighted to have been announced as the 2006 winners. Unfortunately we were beset by a series of events which necessitated the majority of the group leaving either early Sunday morning, Sunday evening or early Monday morning. As a consequence, those of you who came to see our encampment on Monday found 2 tents, 5 people and an empty privy...hardly a good advertisement for Living History Competition Winners!

I am, therefore, returning the �500 cash prize we received for winning the competition, and will leave it to the judges to decide whether we retain the title of competition Winners.

The FitzAlan Household (Raven Tor) have always worked hard towards demonstrating a high level of authenticity through our living history displays. We entered the competition with the goal of sharing what we have learnt, and raising peoples awareness of what can be achieved within a living history environment, rather than for financial gain.

I can only apologise for the groups absence on Monday, and refer you to our website www.raven-tor.co.uk where photos of what the encampment had looked like will appear within the next 2-3 weeks.

I hope that the FitzAlan Household (Raven Tor) will be able to attend the Herstmonceux Castle Medieval Festival in 2007, and thank all who took the time to come and see us on the Saturday and Sunday. We all really appreciated the support, encouragement and enthusiasm that you gave us about what we were doing.

Best regards to one and all, and hope to see you all next year.